After the collapse of the bell tower onto the nave of the old church on the 15 February 1672, the Carmelite, Fra Josep de la Concepció, designed the new building that we nowadays know under the name of the parish church of Santa Maria de l’Alba in Tàrrega. The temple has many of the distinctive traits of Fra Josep’s work: criteria of austerity and simplicity, with a tendency towards the monumental effect through the creation of wide interior spaces, a system of harmonious proportions, the absence of superfluous ornaments, high plinths, great pillars, and the use of the dome as an architectural element to top off the space. The construction of the new church began in the same year of 1672 and was blessed in May 1696, although the work was not finally finished until 1742.

Fra Josep de la Concepció, member of the congregation of the barefoot Carmelites, is considered the best-known baroque architect in Catalonia. He set out the lines for buildings belonging to his religious order as well as many civil buildings, altarpieces, and other works. Outstanding examples are the barefoot Carmelite convents of Sant Josep and Santa Anna in Énguera (Valencia), Our Lady of Gràcia in Barcelona, Sant Jeroni in Vic, Our Lady of the Miracle in Tortosa, Santa Teresa in Balaguer, Saint Hermenegildo in Madrid, or that of the barefoot Carmelite in Reus, also parish churches of Sant Feliu in Torelló and Santa Maria de l’Alba in Tàrrega. Chapels for Tarragona and Barcelona cathedrals; the project for the facade of Girona cathedral, and civil buildings, such as the Palau del Virrei in Barcelona, the Town Hall and Episcopal Palace in Vic or the Hospital in Reus.

At the beginning of 2004, the idea of doing al fresco murals in the parish church of Santa Maria de l’Alba in Tàrrega began to ripen. I wanted to make a new artistic contribution to this baroque building where my father, Jaume Minguell i Miret, had also painted frescos.

Its balanced proportions, the grandiosity of its walls, turn it into an architectural space with a wide range of possibilities for artistic action.

With the cycles of frescos in Santa Maria de l’Alba, I want to create a large-scale project that fills the walls and arches of the transept, and the arches of the central nave, playing with the tradition of this millenarian technique, updated to a contemporary context, to integrate it into baroque architecture.

This project is complex, long and costly, and must be undertaken in different stages.

Between 2004 and 2005, the process of painting the first set of al fresco murals in this project began on the left wall of the transept and its arch, under the name of Resurrectió.

Between May and December 2004, the artist dedicated himself to studying the architectural space, the iconographic programme, the light and colour, generating a large number of sketches, preliminary studies, full-scale drawings and three-dimensional models until the final project was defined.

The light from the empty tomb shines out on a spring landscape, the moment of the rebirth of nature.

In 2006, Josep Minguell began working on what will be his second mural scene in the parish church of Santa Maria de l’Alba in Tàrrega: Nativitas. It will be placed on the frontal wall of Resurrectió, that is, on the right hand side of the transept and to the left of the high altar. It is planned for 2007.

With regard to the iconographic programme, the Nativitas set follows a compositional symmetry in relation to the Resurrectio.

The first studies situated some references to the prophet Isaiah with the ashes that purify his lips and also Saint John the Baptist, the voice in the desert, at the ends of the arch that covers the central scene. In the central part of the arch, there is the star and the angel.

The frontal wall has a background of a large winter landscape of the Urgell with hills, tracks, trees and animals, all of which are threatened by man’s actions.

The nativity is placed in a cabin integrated into the landscape with the figures that take part in the iconographic tradition, avoiding the representation of the Epiphany for a more intimate scene: the mother watching the son wrapped up in a white cloth. The father, downcast, holds the flowering branch as an allusion to the tree of Jesse. The ox and the mule are also there.

The bags and packages tell us they are far from home.

As a representation of the Epiphany, manifestation to men of God incarnated, an allusion to the Wise men of the Orient and their gifts of gold (royalty), frankincense (divinity), and myrrh (death as redemption). 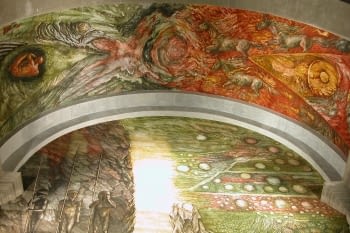 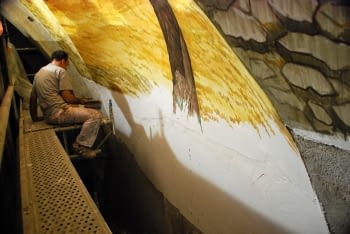 We use our own and third-party cookies to improve our services and show you advertising related to your preferences by analyzing your browsing habits. If you accept and continue browsing, we consider that you accept their use. You can find out more about More information
Settings Accept