Fresco mural, located in the lobby of Tarrega’s townhall as a personal tribute to the Tricentenari event. The work occupies 15.4 square meters. It reflects the loss of freedoms in Catalonia after the defeat of 1714 and it shows how the people emerge in spite of the Nueva Planta decree.

The location is no accident , since there was a prison where the mural was painted. Its gate, still present, is the central theme of the mural.

The mural shows the square from the prison window , where daily life is presented through different elements (carts loaded with wheat for the army, instruments, eyes ...)

The fresco is an interplay of light and shadow, as the Baroque art of that period has been considered: contrast of light and dark, the art of grazed white and the dramatic look. 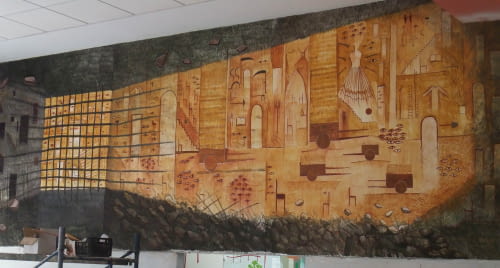